The EBRD has welcomed the acquisition by Romania’s Banca Transilvania of a 39.2 per cent stake in Victoriabank, a key Moldovan bank. It is the first time since 2007 that a foreign bank investor has entered the Moldovan market. As a result of the transaction, which took place in Chisinau today, Banca [...]Details

The priorities of Banca Transilvania for Victoriabank, as shareholder alongside the EBRD, are as follows: [...]Details

Banca Transilvania has become a shareholder of Victoriabank

Our Message of Sincere Condolences for the Romanian Royal Family

With great regret we received the news about the death of His Majesty King Michael I of Romania, one of the most emblematic personalities who marked both the Romanian and European history. For all of us His Majesty will be a symbol of love and attachment for Romania and the Romanian culture and [...]Details

The net profit of BT Leasing (BTL), which is part of the Banca Transilvania Financial Group, has increased by 33% during the first nine months of the year versus December 2016, reaching 15.4 million lei. “Our focus this year has been the development of the leasing product network, which consisted [...]Details 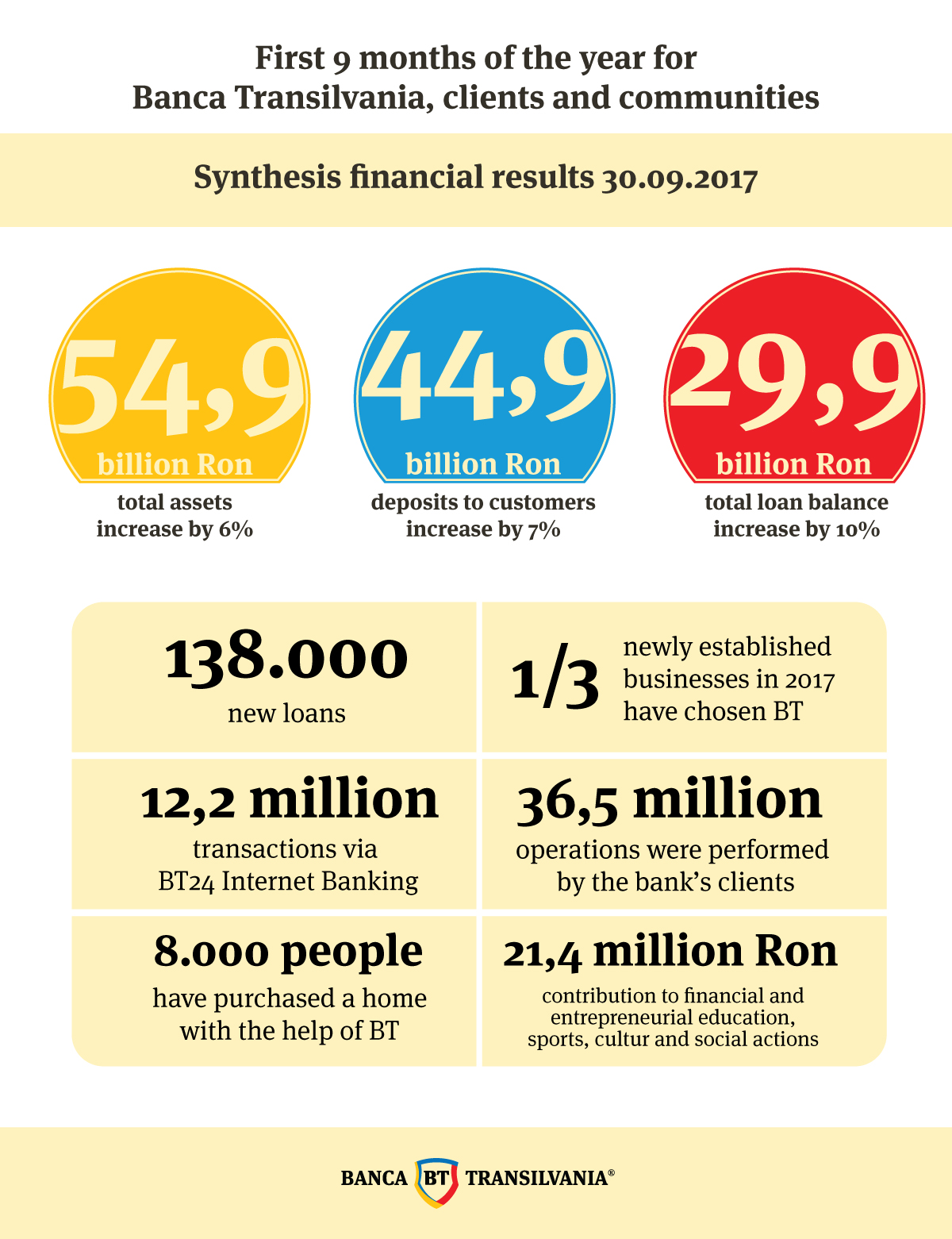 BT, the Partner of the Entrepreneurs and Supporter of the Romanian Economy. Financial Results as at September 30, 2017

The first nine months of the year were a period of organic growth for Banca Transilvania, which closed with positive results across the business lines, while developing a large-scale project in terms of digital banking and not forgetting to be strongly involved in community projects. Financial [...]Details

Exclusive negotiations between Eurobank and Banca Transilvania progress further, as parties prepare for final steps towards signing of agreement

Banca Transilvania S.A. hereby informs the investors that Eurobank and Banca Transilvania have been pursuing exclusive negotiations as regard to the potential sale of Bancpost SA, ERB Retail Services IFN SA and ERB Leasing IFN S.A in Romania. During the last few weeks there has been significant [...]Details

Banca Transilvania intends to invest in one of the largest banks in Moldova, Victoriabank

BT and EBRD, a strategic partnership to replicate the Romanian model Banca Transilvania wishes to invest in Victoriabank, the third largest bank in the Republic of Moldova, acquiring an initial stake of over 39% of the latter’s share capital. It is for the first time in the past ten years [...]Details